When CEO and Founder of Innovation Corridor Investments Eric Drummond began his legal career more than 25 years ago, he was often the only minority in the room. He would think to himself: this is what happens when you’re breaking new ground and we have progress to make.

“Now, I’m not breaking new ground, I’m just irritated. We can do better,” he said.

Innovation Corridor Investments, based in Colorado, is one the programs that received a Strategic Award given as part of the Wells Fargo Innovation Incubator’s (IN2) effort to encourage diversity, equity, and inclusion (DEI) initiatives. In 2021, IN2 provided $350,000 in awards to four organizations within the Channel Partner Network with funds that came from the Wells Fargo Foundation’s contributions to IN2. A year later, all four recipients have made major steps forward.

With his award, Drummond and Innovation Corridor are launching a new female and DEI-focused fund.

Drummond’s plan is to increase the fund to $35 million and get that money into the market this year. They started interviewing general partners in June, and he believes they will come to an agreement not long after that and then craft the agreements.

“This program is a network of networks. Anyone that has an interest in supporting any of the spokes that are driven off this hub, there’s a place for them in this network to help us solidify it, grow, and create a sustainable model around it. It’s a big sandbox, let’s try to play together and see what we can build here,” he said.

Drummond’s goal is eventually to have the fund support 30 to 40 companies in its portfolio, all either launched by underrepresented individuals or groups, or have an underrepresented group on the executive team.

“We should all band together to do what we can do. Maybe we can reverse the climate-change process,” he said.

Dan Radomski is executive director of Centrepolis Accelerator which invests up to $20,000 in select entrepreneurs from underrepresented backgrounds in the form of a no-interest loan that startups have 24 months to pay back. For him, this purpose came from his late father who often told his son to make sure he helped minority groups in his adulthood.

“It really stuck with me the number of times he said to me: I really want you to do this in life,” Radomski said. “I grew up in a distressed community and many of my friends were in that underrepresented, underserved population. I used to think I had it tough, but my dad at least owned a machine shop and I learned how to become a machinist. Many of my friends did not have the same opportunities.”

Centrepolis started the program four years ago to provide dedicated specific services and funding to cleantech hardware and companies operated and managed by underserved entrepreneurs, including women, people of color, veterans, and those with disabilities. The program gives inventors, startups, or small businesses a place to go for help with design and engineering.

“We have a wide range of personnel that helps with designs, provides analysis on the strength of materials, or creates computer-simulated situations. The idea is that we provide all that help with product design and reengineering at no cost, and they commit to paying us back,” Radomski said. “Had we not received the DEI award when we did, then I don’t think we would have been as successful.”

The DEI award helped Centrepolis to create an evergreen fund that can keep helping company after company. Some of the companies Centrepolis aided are now fully commercialized, while others are making tremendous progress. Here are three examples Radomski is especially proud of:

“We’re unlike other incubators and accelerators in our focus on hard-tech innovation. We’ve created a process to ensure the hard tech is designed and engineered with durability and reliability top of mind. We bring experts to you and make them a part of your team, a true extension of our clients,” Radomski said. “Applying the experts, manufacturers, and product development discipline—that’s what makes us unique.”

After starting in Michigan, Centrepolis is now supporting companies across the U.S. and around the world.

Based in Memphis, Tennessee, AgLaunch wants to ensure farmers are at the center of innovation and the changing dynamics of agriculture by connecting early-stage agtech startups directly with farmers. According to Senior Director Rebecca Kaufman, AgLaunch is set apart from other accelerators and farmer-trial programs because the AgLaunch farmer becomes a true partner for the startup by providing expertise, data, and time.

“We want to make sure farmers have access to new opportunities and seeing the benefits of the changing agricultural landscape,” Kaufman said. “Our farmers are shareholders in the startups we help and engaged early enough for the technology to be meaningful and useful later. You will build a better product if you are talking to an innovative farmer earlier in your development process and essentially have them on your research and development team.”

Kaufman says AgLaunch has always had a focus on ensuring their work was representative, but their DEI award allowed them to shift to a more targeted approach.

“It allowed us to think more specifically and strategically. For us, it added the capacity to create a fellowship program that encourages students at historically Black colleges and universities (HBCUs) to consider agriculture and agtech. It was incredibly helpful in terms of supporting a real, focused effort around recruiting and support of BIPOC (Black, Indigenous, and people of color) startup founders,” Kaufman said.

To do this, AgLaunch targets students and faculty at HBCUs, offering a fellowship program to encourage an agtech idea and build toward founding a startup. These founders then work with AgLaunch’s entrepreneurship team and farmers to develop an idea or a case study.

The DEI award from the IN2 Channel Partner Network gave AgLaunch the power of leverage for additional investments, reaching $850,000. In addition to recruiting students at HBCUs, AgLaunch is also helping HBCUs create innovation ecosystems on their campuses. This collaboration determines what pieces of an ecosystem the school needs and what they should start thinking about.

Kaufman believes AgLaunch could not have received the DEI award at a better time—during the COVID-19 pandemic.

“The timing was good for us. It was a bit of good news in what felt like a dire time. It showed us that we can do something in a time where it felt like we were strapped in what we could accomplish. It felt like we had resources to do something meaningful, which was incredibly encouraging to us,” she said.

Nathaly Moreno, equity and access manager for Elemental Excelerator, believes the road to equity must be a journey.

“Folks are looking for the magic bullet of equity, but there is no such thing. It really is a rubric, and a process, and frameworks, and it’s something you do every day. It’s something that you train your mind as a default,” Moreno said. “We’re not going to undo many years of inequity overnight, but the rewards are so vast once you put in that work. This is something you’re always on.”

Based out of Hawaii and California, Elemental Excelerator runs a variety of programs to encourage individuals to join the climate sector, focusing on traditionally excluded groups. The programs include internships, and other ways to support innovators, including coaching sessions, and workshops.

“It’s important to do this work because, as we know, many individuals impacted by climate change or severe weather events are most likely excluded groups. Those are the individuals who should be working on the solutions,” Antoinette West, career pathways manager for Elemental Excelerator, said. “We want to inspire and engage more individuals from traditionally excluded groups to come into science, tech, and engineering. Explain that if you’re really interested in making an impact on your community, coming to this sector would be an amazing opportunity for you.”

The DEI award helped Elemental Excelerator educate its staff on how to create replicable, internal DEI processes that are scalable across the climate sector through soliciting feedback from participants to set up targeted training, workshops, and connections with people already working in the climate sector. The DEI award also helped launch Career Pathways at Elemental, which hosts the Empowering Diverse Climate Talent Summer Internship program. In 2022, this program provided 72 interns weekly professional development sessions with a career coach and a Friday speaker series that covers a wide range of topics from energy transfer to energy policy, and more.

Both Moreno and West say listening to the community is one of the most important ways Elemental Excelerator can help.

“We are doomed to repeat what we’re already doing that causes climate change if we don’t listen to the folks on the front lines of climate change,” Moreno said. “We’re really focused on ensuring that we don’t repeat what we’ve done in the past. If we address their concerns directly, then we can create a holistic system.”

The goal is to make sure all participants can leverage their experiences with climate change, including those who have lived experiences as being from frontline communities, or who are traditionally excluded from climate innovation, and combine that with their skills and passions into a career with meaning that lets them contribute to society as a whole.

“One of my core values is to be a good ancestor. I can really shepherd students along in finding their purpose and role while ensuring the next generation has a world to thrive in,” West said. “I don’t want it to feel like a surprise for the climate sector and these workplaces to be diverse. I want this to be the standard.”

Moreno agrees, pointing out that the trauma of climate change can be a crucial motivation in the drive to push change.

“There are so many climate impacts we experience and it’s painful, but pain drives you to action because you know that situation is untenable. At an individual level I might not have much impact, but if I can reach companies that are just starting out, at the beginning, I can help them embed equity from the start. Then when they grow, they have that in their DNA,” she said. “I want to inspire workplaces I would want to work in.”

The goal is to find more ways IN2 can support different DEI initiatives. IN2 will deploy $1.25 million through 2024 to DEI efforts, continuing to provide additional funding to channel partners, as well as find other ways to support DEI across the cleantech ecosystem.

To recognize her work in promoting this effort, IN2 Innovation Network Manager Kimberlee Ott recently won an award from the Denver Business Journal. The award recognized Ott’s many efforts, including issuing the initial call for applicants for the DEI awards and helped guide the process forward.

“It’s very exciting and humbling to be recognized for what we’re doing at NREL. It validates the fact that we’re moving in the right direction and we’re making necessary progress,” Ott said. “We are starting to scratch the surface—there’s more work to be done. We’ve been privileged to fund awards, but that’s not enough.” 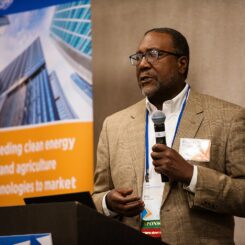 IN² Demonstration: Getting V2G Good to Go

IN² Demonstration: Getting Control Outside of the Lab

IN² Demonstration: The Possibilities of a Plug-and-Play Kitchen

Alumni Impact the Environment and Market

How Technology Can Help Housing Affordability

Building More Efficient Housing, One Blok at a Time