In order to transition to the energy system of the future and decarbonize our economy, we need to scale innovative new technologies. But did you know that an estimated 90% to 95% of startups fail due to a lack of proper financial and technical resources? This is especially true for “hard” technology startups, which often lack funding opportunities due to long development, testing, and deployment times. That’s why the IN²’s mission is to de-risk innovations and speed the path to market for clean technologies.

IN² offers startups the opportunity to work with the best scientists and engineers in the world and provides access to the multi-million dollar, state-of-the-art facilities at the U.S. Department of Energy’s National Renewable Energy Laboratory (NREL) and the Donald Danforth Plant Science Center. By expanding their capabilities at these facilities, 18 of our alumni companies overcame the infamous “valley of death,” and we’re currently working on doing the same for our 38 other portfolio companies.

But completing technical validation in the laboratory is just one step on the path to commercialization. The next major hurdle early-stage startups face is getting their technologies into the hands of the end users, proving that they will be a viable solution in the marketplace. More often than not, young companies need a chance to scale their products and implement them in real world environments before making their first sale.

Let’s take a look back at some of the demonstration projects that IN² has facilitated with the support of NREL, the Danforth Center, and Wells Fargo.

NREL not only conducts world-changing research in its laboratories, but it also conducts itself as a research instrument. The “living laboratory” allows NREL and its partners to study the viability and impact of innovative clean technologies of all kinds. After being selected into the IN² program in 2017, PowerFlex was able to validate its adaptive electric vehicle (EV) charging network at NREL’s Flatirons Campus. NREL installed 16 PowerFlex charging stations for use by employees, and PowerFlex used the resulting data to improve and develop its product with technical assistance from NREL researchers. In return, NREL realized energy and cost savings from the demonstration project and later purchased more than 100 charging stations for the South Table Mountain Campus after PowerFlex won an indep

endent request for proposal. At the time, the NREL installations were some of PowerFlex’s largest projects.

PowerFlex graduated from the IN² program in 2019 and was acquired by EDF Renewables, one of the world’s largest developers of renewable energy. To date, PowerFlex has installed over 6,000 EV charging stations across the country, helping customers manage changing electrical demands and conditions from the influx of EVs on the road today.

This summer, NREL installed five quantum dot (QD) solar windows at its cafeteria as part of a demonstration project with IN² portfolio company UbiQD. UbiQD’s solar windows are made from glass, laminated with a QD-doped interlayer which absorbs sunlight to generate energy. The windows will remain installed for one year as NREL and UbiQD collect data on their performance. The demonstration is part of a larger experiment to achieve net energy production through innovative window technologies, which would address the need for more renewable energy in cities with little open space by turning buildings into sources of energy generation.

As with every early-stage startup, years of hard work went into research and development before UbiQD was able to manufacture a window that could be installed in a real building. Through the years, NREL has assisted UbiQD with early-stage materials work, building energy performance modeling, manufacturing economics modeling, and durability assessment of prototypes. UbiQD has grown to 24 full-time employees in this time and plans to continue growing its workforce while simplifying the manufacturing and installation processes for solar windows.

Field testing is an important part of all product development, but its necessity is amplified for agricultural technologies. When IN² expanded into agtech in 2018, NREL and Wells Fargo turned to the Danforth Plant Science Center in St. Louis, Missouri, as a strategic partner to help further validate and scale promising startups addressing critical sustainability challenges. The Danforth Center has facilitated several demonstration projects for IN² portfolio companies since then, such as helping Aker Technologies with early validation of technology that automates the crop-scouting process. When Aker entered the IN² program, it had developed probe equipment with an array of computer vision and environmental sensors small enough to be mounted on drones that collect insect pest information from above and below the growing canopy. With help from IN² and the Danforth Center, Aker has since expanded its imaging methods to also be able to detect plant diseases for more targeted, reliable crop assessments to improve profitability and increase yields.

In September 2021, IN² established a partnership with Farmers Business Network, a technology enabled, direct-to-farm commerce, community, and sustainability platform helping family farmers maximize their farms’ profit potentials. With support from the Danforth Center, the partnership will give IN2 agtech startups the opportunity to test their products on real farms next year. For example, CoverCress has provided their seeds to a group of growers in FBN’s network. The growers became some of the first to grow the CoverCress cover crop at scale this fall, which protects and improves soil without displacing other crops. The feedback from the growers about their experience will help CoverCress prepare for its pilot launch in the fall of 2022.

As one of the largest financiers for the energy, agriculture, and real estate industries, Wells Fargo recognized the need to accelerate cleantech innovation into these markets, which ultimately led to the formation of the IN² program in 2014. Through the Wells Fargo Foundation, IN² has supported a total of 56 startups with more than $14 million in non-dilutive funding to date. Part of that funding has gone to demonstration projects that not only help the startups commercialize their technologies, but also help the demonstration partners take action on sustainability challenges.

Whisker Labs was one of four startups selected in the first IN² cohort and was invited to participate in the program because of its novel meter technology designed to allow building owners to better understand their energy consumption and find ways to save energy. After working with NREL’s technical team to evaluate the technology’s performance in the laboratory, Whisker Labs conducted a field demonstration project at a Wells Fargo branch in Aurora, Colorado in 2016. The objective of the field project was to compare the cost and ease of Whisker Labs equipment to conventional power measurement equipment, as well as to evaluate power measurement accuracy.

After eight months, the team estimated the installation labor cost for the Whisker Labs system at one-fourth the cost of installing conventional measurement and verification equipment. The project provided the team with insight into the practical applications of Whisker meter data and verified that the meters can meet the analytical needs of commercial buildings. The data collected from the Whisker meters were also used to identify energy and cost savings opportunities at the Wells Fargo branch.

Wells Fargo is piloting IN² portfolio company Turntide Technologies to demonstrate the commercial viability of its Smart Motor System at two branches in Colorado. The Turntide Smart Motor System is a full technology stack composed of integrated hardware and software that helps building owners reduce energy consumption, utility bills, and operating costs. Through the IN² program, NREL researchers have helped Turntide validate the energy efficiency and performance of its Smart Motor System under various operational scenarios while identifying performance gaps in traditional systems. Turntide has captured the attention of major investors like the Amazon Climate Pledge Fund and has successfully installed more than 5,000 systems nationwide. Now, coming full circle, Turntide will help Wells Fargo make progress on its goal of reaching net-zero greenhouse gas emissions by 2050. 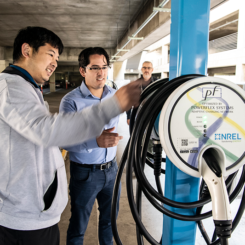 Alumni Impact the Environment and Market